He did mention this classmate he worked on a project with and went to her apartment. Both his exes cheated on him so he had trust issues so he said he would never do that to me or go behind my back. I mentioned a guy my friend was trying to set me up with to help me move on I told my ex I wasn't interested but he didn't like it. Do you have any advice? It seems like he's trying to get back at you, and this girl is probably a rebound that was emotionally there for him during the times you guys were fighting. If he really has nothing in common with her, they would not last.

Also, based on what you told me and how fast they jumped right into things, it would seem like she's most likely a rebound.


Focus on your life, improve yourself, even go on other dates. If you guys shared a meaningful relationship, it's unlikely that he would get over you so quickly. I'm just so confused.

He just didn't seem like the type of guy to do that, especially since he would say I'd never do that to anyone since both of his exes cheated. But it was only like 2. I don't get it. I'm nervous because he started saying things like it wasn't love for us even though he thought it was and that we weren't compatible. In the months of getting to know each other he would say we were a team and we had a lot in common.

Hi, I posted earlier, but I don't think it actually posted bc I can't find my post now. He said he loved me, believes he is in love with me, and that I'm his best and only friend but I deserve everything I want and he doesn't think he's the guy to give it to me. I'm the longest relationship he's had as an adult, the only woman he's said I love you to, and the only woman he's lived with.

He has not had a serious adult relationship. However, 4 days later he was sleeping with a woman from work who is the exact opposite of everything he's ever said he's wanted. She 37, mother of 4, divorced, uneducated, smoker, and a truck driver at the same dead end job he's at and hates so much and trying to leave when he's done with his master's.

He's explained that she's nice and he's not just sleeping with her. That he likes her despite the ridicule he receives at work.


He told me he prefers me over her and that she doesn't even come close to me so I am not to compare myself. We agreed I would move out in June, so he has since moved out and he found a rental close to her. She is already posting on facebook that he's the one. Meanwhile, every time he comes to maintain the property he tells her that I'm not here and he proceeds to hug, kiss, and spank me playfully. I told him if he really liked her then he would be honest with her. He agreed that he doesn't want to be that kind of man for anyone.

It sounds like he got a case of cold feet, but I'm not sure.

He seems to be doing everything in his power to make it work with this woman who is so obviously a poor replacement of me but also an excellent distraction from him having to deal with our breakup and lovers and best friends. In fact, he still admits that I'm still his best friend and he can't talk to her as openly and without defense as he can with me. I don't want to be the other woman in his relationship, but is this a rebound even if he's trying to do everything right and take her wishes into consideration?

Also, am I being wishful in assuming he got a case of cold feet? Do I proceed with no contact? I've been doing my part in bettering myself. Every time he sees me he tells me how great I look and that our breakup suites me. I've told him I went on a date to which he showed jealousy and admitted it but then shook it off saying he can't really say anything considering what he's doing himself.

Is there hope for us? There might be hope for you, but not right now. If that relationship he's in is a rebound which it sounds like , then you should not continue to stay hopeful in one place but at least move on a little, so that you don't constantly think of it. I would suggest proceeding with NC and just in general, moving on with life for the moment.

I appreciate the feedback and I'll continue to work on myself. Actually, I'm feeling better about myself everyday. It wasn't a bad breakup and we both remained respectful and civil with each other. There's love there, I'm just not sure whay kind of love it is, romantic or friendship. But I'll move forward as though it's done and let him figure out what he wants in life. Meanwhile, I'll just get back to being who I was before I dedicated my life to him and his well - being. Hey Ryan, I was with my ex for 9 years.

He proposed in may and things seemed fine. Maybe a little stressful with wedding planning and me being in school and working full time. Then around mid october out of nowhere he states he's unhappy and he's been unhappy for a while and that I treated him like shit for 9 years. I know I can be snappy at times and I begged for the first couple of weeks to give me another chance and to work on each other but he would just say that he gave me so many chances.

In the back of my mind I always had this gut feeling about this girl that he was working with. Since last november I told him I felt uncomfortable with him being friends with her. Last December someone actually made a fake facebook account and messaged me how close the two of them are and how they hung out before school all the time.

When I confronted him he said some crazy person at school was starting rumors. Fast forward to the present I found out that they have been talking and he went to her for our relationship advice and they both got feelings for each other. I caught him at her house and she met his family 3 weeks after we broke up.

Is Your Ex Dating Someone New? That Could Help You Win Them Back

I know this has been going on for a while so I am unsure if this is still considered a rebound. He lied to me and his friends about the girl and is still trying to hide her. He told everyone that he and the girl were going on a break to prove to everyone that he did not break up with me for her. Over the next month and a half I have been seeing a therapist and things seemed to be going okay with my ex and I.

He would always be the one to initiate the conversations and we went shopping, dinner, and the movies a couple of weeks ago and things seemed great. He even texted me how much fun he had. He just keeps saying he is scared to give me another chance and doesn't think that I will change. He would go back and forth every couple of weeks. 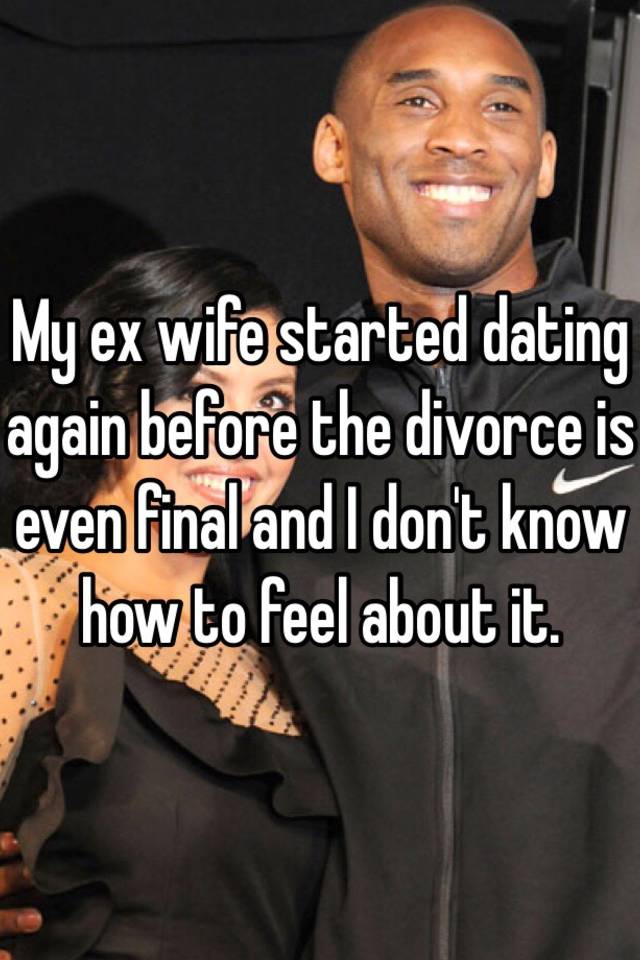 An example, I was in Miami one weekend and he was constantly texting me and his friends telling us that he wanted to work it out. As soon as I told him if we are trying to work on each other then he would eventually have to find work somewhere else he flipped out saying I was trying to control him. He obviously still wants to be with this girl and is now using the excuse "I'm working on myself.

I have not spoken to him in a week. I am just afraid that not talking to him is bringing him and the girl closer together. Do I continue with the no contact and is this girl a rebound or not? He would think you aren't capable of change because you're still in relatively constant contact with him and just like it's hard to tell if someone lost weight if you saw them everyday, this works out to be the same - change can't be seen clearly if you see the person or talk to the person constantly.

I suggest proceeding with NC to actually work on any issues you had to become an improved version of yourself first. This girl could be a rebound but it really depends on the situation was he cheating all this while or only started dating her after the breakup. Honestly, in this situation, you might want to mentally prepare to walk away because if he can't even be honest towards you or his friends about this, you might find it hard to trust him on future occasions if you guys were to work things out.

I just think he's using the excuse I won't change because of the girl. Clearly if the girl wasn't in the picture we would be able to work on our relationship and you would think he would want to give me another chance because he did propose. I have not spoken to him in 2 weeks other then just saying merry christmas yesterday. I do not think he physically cheated while we were together but he did emotionally cheat.

He was talking to her over the past year when I asked him not to and he would lie about it. He apparently saw her in the summer with another coworker and I had no idea and her number was changed in his phone. He caught feelings for the girl and other then stepping back from the situation he kept going on with it. I had all his passwords so I could see what he was doing with the girl and that is how I caught him because he was lying to everyone about her.

Now I really don't know what is going on because I'm kind of starting to not care. I still want to keep up with the no contact and see how that goes. Hiii okay I need some advice So I dated my boyfriend for 3 years, we moved in together at the beginning of this year. We had a difficult relationship - I cheated once, he cheated a few times. We broke up for a week or so last year and then we got back together and decided to start fresh, no more cheating or anything we were gonna be serious. Then we moved in together a few months later.

He has used this as leverage and an excuse to cheat throughout our relationship. About a month ago he told me he cheated again - we broke up. For a week I had to live there and he was so cold, didn't talk to me or see me. He was plain rude. Then I moved out and he came running back, saying he regretted everything and he still loves me and wants to work it out.

I went away on a trip for 3 days, when I came back he told me he doesn't know what he wants and he has met someone else who makes him really happy.